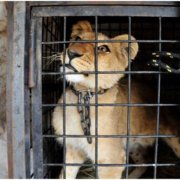 The world can sometimes be a very harsh place for all of us, not least of all, for animals, who cannot speak for themselves nor take care of themselves if held in captivity or outside their natural environments. Domestic animals rely on us to instil security, warmth, nourishment and love on them.

One of the most distressing stories of late was about the helpless giraffe that died while being transported on a Gauteng highway. Can anyone really be so negligent and so cruel as to transport tall animals on an open truck without anyone riding shotgun to check all is well? Surely not? But yet, it happened and it must have been an awful end to the poor giraffe!

Then there’s the story of the trapped dog that howled for two weeks before someone finally tracked him down and rescued the emaciated, desperate animal. Who does that? Why would you do that? To us animal advocates, it is impossibly cruel, almost beyond comprehension.

A woman was recently beaten while trying to stop someone abusing a dog. She said it had been worth it. She saved the dog’s life.

Parading animals in circuses and using them for the sole benefit of entertaining us humans is not okay. Not in any which way or form. Please, don’t support these circuses, rather allow your little ones to see animals in their natural environment such as game reserves and even allow them to sit in the garden at home and watch the birds flitter by in the sky and trees above. There is enough entertainment these days in all shapes and forms so as to let the animals held in captivity to break free from the chains of neglect and abuse.

All animals, great or small have the right to the 5 freedoms in life, as do all human beings. They are just simple freedoms that all living beings should be entitled to. Animals have beating hearts and blood flowing through their veins. They need us to take care of them, nurture them and most importantly, to love them as we do one of our own.

What are the Five Freedoms?

Freedom to be free

Let’s all stand together and prevent cruelty to all animals that grace this beautiful earth of ours. We CAN make a difference.

On a more positive note: Don’t forget to come along and join in the fun at our annual Spring Fling/Cupcake Day on the 6th September at our Main Street Centre, 39 Main Street, Howick. Bring along your cupcakes in aid of animal welfare and you could win a prize for the “best dressed” cupcakes! A cupcake decorating competition and an icing demonstration will be on the cards too! We still have a few places left for stall holders so book now to avoid disappointment. Call Bronwyn on 033-3306548 for more info on this.

Did you know?
Scroll to top