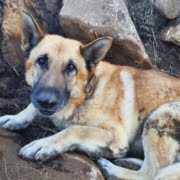 In September 2021, a Midlands local’s bike ride turned into a rescue mission when he came across a lost dog on Swartkop mountain near Hilton. Bradley Rudling saw a male German Shepherd huddled about 500m down a steep and rocky hill.

“He was friendly, but very lost,” Bradley recounted upon approaching the dog, “I noticed that he couldn’t walk very far because he had a bit of a limp.”

Bradley shared his biltong and water with the dog and contacted lost and found pet groups who referred him to our uMngeni SPCA. The poor dog was very thirsty, and finished Bradley’s entire bottle of water.

Our trainee inspector, Menzi Vilakazi, came out to find the pair at about 6pm. Bradley and the dog waited for over three hours as Menzi tried to locate them in this remote area with poor signal.

Menzi drove as far as he could up the mountain, but part of the road was only accessible by 4×4, so he ended up climbing on foot to reach the dog.

“At first, I was scared to go up the mountain because I didn’t know what I was going to find. I had to carry the dog because it had a limp.”

Bradley said on Facebook: “Huge shout out to Inspector Menzi for assisting me tonight with a call into the mountains. Whilst out riding, I came across this stunning male German Shepard and with no way to transport him back to a warm bed and safety. I called upon Menzi to come to the rescue. Approximately 25 minutes along a dirt road to the top of Swartkop mountain and roughly 500m down a steep rocky hill, Menzi came to the rescue. Huge shout out to the team over at uMngeni SPCA for a speedy response.” 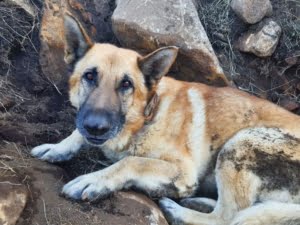 Jock on the mountain

After being brought to the SPCA, the dog was fed and examined by our Vet. He had very bad teeth and both his hips were significantly compromised.

We estimated the dog to be about six years old. He must have belonged to someone at some point because he was very tame. However, even after being featured in local news and on various Facebook groups, no owner came forward.

After two weeks without any sign of an owner, we put out an appeal for a special home for our Swartkop rescue dog. Because of his special needs, he needed someone who could keep him on anti-inflammatories and treat him with love and patience for the rest of his life.

Not long after being put up for adoption, our special rescue boy was adopted! He is now called Jock.

The person who adopted him (who didn’t wish to be named) was willing and able to meet his special medical needs. According to his adoptive ‘angel’, Jock fitted right in to the family—what a lucky boy! From sleeping out in the open, with no water, food or comfort, he is now all tucked up in bed with a jersey when there is bad weather and gets all the cuddles and love he could ever want.

We’d like to thank everyone who went out of their way to give this boy a second chance and the happy home that is meant just for him, with special thanks to Menzi and Bradley Rudling.

This is what makes what we do worthwhile.

Thank you to the MySchool MyVillage MyPlanet programme and everyone who has chosen us as a beneficiary so that we can keep saving dogs like Jock. 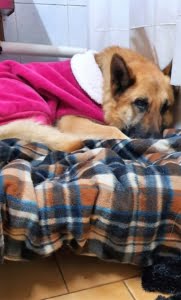 Jock in his new home