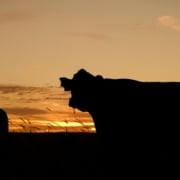 A team of inspectors from the National Council of SPCA’s Farm Animal Unit went into Botswana to assist in an emergency situation after a truck carrying cattle from Namibia to a feedlot in Mpumalanga had overturned in the vicinity of Kayne in southern Botswana.

The accident had occurred in the early morning of 16 March. The NSPCA was advised of the situation at 15h30 that day by our government’s National Department of Agriculture who requested assistance.

As the South African State Veterinary Services worked to make contact with their counterparts in Botswana. The NSPCA telephoned the SPCA in Gaberone. The NSPCA was advised that they only deal with domestic animals. Contact was made with the SPCA employee who was “on the road” a mere 85km away who advised that the emergency situation was too far away and that they didn’t deal with instances of that kind.

The NSPCA had already dispatched a team as we believe that animals always need to be given the benefit of any doubt. Some may still have been alive and needing assistance. It was around 300km from the NSPCA to the border alone and a further estimated 115km into Botswana.

Contact was made with Willie Booysen, the owner of Booysens Transport in Namibia, the company transporting the animals and also the owner of the cattle. He thought that the animals had been off-loaded and were safe. His understanding was that the animals would be returned to Namibia the following day as the feedlot in Mpumalanga had subsequently declined the “consignment”. A relief truck had been organised to collect the cattle and return them to Namibia.

The NSPCA team arrived to find that State Veterinarians from Botswana had off-loaded whatever animals they could. Local people had assisted in this regard. 17 animals were dead on the truck and 11 had to be put down to end their suffering. These animals were trapped beneath dead animals and were found by the NSPCA inspectors when they arrived on 17 March, some 28 hours after the accident.

The injured animals had not been put down by the veterinarians on the scene or by the police on 16 March as they did not have equipment to do so. That is, twenty eight hours after the trauma of the accident, injured cattle were still alive and suffering. Equipment brought to the scene by the NSPCA was used by the NSPCA personnel to put those animals out of their suffering humanely.

Senior Inspector Grace de Lange described the scene. “There was one cow with one leg half-sheared off, simply missing. Off-loaded animals lay with broken limbs. Injuries to animals still in the truck included broken limbs, head injuries, eye injuries and general trauma. The animals had not had water since they left Namibia on Tuesday morning until they were reached by the NSPCA on the Thursday morning. The truck was in full sunlight and the weather was hot to say the least.”

“The veterinarians on the scene agreed that the animals required water as a matter of urgency. It is very hard to even begin to describe the suffering and mayhem we experienced.”

The NSPCA openly asks how long those animals would have still been left to suffer if our team had not travelled to Botswana from Gauteng with the necessary equipment and a willingness to assist.

In addition, it is time that all vehicles/transporters carrying animals should have emergency equipment and the driver and co-driver should be trained to destroy animals that are so blatantly suffering. The transportation of animals from Namibia and Botswana and exported to other countries should be outlawed. The NSPCA intends to take this matter further.

The N SPCA works to protect and assist all species of animal. We respond to emergency situations including those across our borders when animals need help.

Thoughts go out to the individuals who work in such tragic situations.