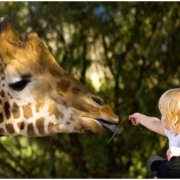 The ethics of interaction programmes involving wild animals have started to be questioned more often in today’s times. Claims of it being done in the name of conservation and education are often heard. But is there any truth in this?

In order to contribute to the conservation of a species, rehabilitation and release of animals should be a priority. However, in almost all of these facilities in which animal interactions take place, animals are bred intensively but are never released. Further the welfare of the animals is often severely undermined in a number of ways.

Females are often forced to have young more often than they would in the wild in order to have a constant supply of cute babies to be used for interactions. This is done by removing the babies when they are just a few days old to be hand raised so that they can be “tamed.” The females then immediately go into heat again and are bred again. This continuous breeding of the females often takes a major toll on their bodies.

The young animals are also seriously compromised by being removed so early from their mothers. They are often fed an inadequate diet which results in their immune systems becoming compromised and the animals are placed at an increased risk of becoming ill.

These young animals are then forced to endure hours of being touched and petted. This not only places them at risk of injury but also disease transmission from humans and vice versa (zoonosis). Once too big to be interacted with the animals are seen as surplus and are often kept in sub-standard conditions or sent off to elsewhere to face an uncertain end. Male lions often end up in the canned hunting industry and the females are fed back into the facilities to continue breeding. And so the cycle continues.

Education plays little role as many of the facilities do not even provide information regarding the species and life in the wild. Furthermore by touching and playing with wild animals the message that they are cute cuddly animals that can be kept as pets or in captivity is portrayed.

The number of animal attacks at facilities that offer interactions is on the increase. People become complacent around these animals and forget that they are wild and dangerous animals which results in injury or even death.

Touching and handling and riding of wild animals is a completely unnatural practice as human contact and interaction is not tolerated or accepted by wild animals in their natural environments. It is therefore completely abnormal and immoral to put animals into a situation whereby they are continuously subjected to conditions that are completely unnatural to them. The welfare of these animals should not be compromised for these facilities to increase their profits.

(This article is courtesy of the National Council of SPCA’s.)