The act of charity was alive and kicking here in Howick as 6 girls decided to make some money through the sale of cakes, muffins and all sorts of other food goodies to sell on the side of their road. Their parents initially thought this was to raise pocket money for the girls to indulge in clothes and sweets.

As it turned out, the girls had no such intentions! Their main reason and motivation behind it was, in the words of Natalie Rohrs, “to put a stop to all the species of animals that had to be put down on a weekly basis because the SPCA could not find the owner or feed the animals and that is not acceptable!” What wise and wonderful words from dear Natalie.

The girls, all from Laddsworth, decided on their own accord that they would bake muffins, cakes, make jelly and all kinds of goodies that they dreamt up on the way to raise funds for us here at the uMngeni SPCA. They stood on the road for days during the school holidays to raise the funds for the SPCA. What amazing dedication to such a good cause. The animals in our care will be happy to know that we have such fierce animal warriors in our midsts!

The girls raised a hefty amount of R1345!! They tell me that all the passers by were very generous and must have been animal lovers like themselves!

Natalie Rohrs and Kirstie Lowe handed the money over to the SPCA centre where they also received a letter of thanks and an Animal Warrior certificate. The other girls could unfortunately not be present but they also received letters of thanks and certificates. Well done to Natalie, Kirstie, Ashleigh, Janet, Shania, Rebecca and Shania for all your efforts. You are inspiration and we hope other children will do something like you did.

Look out for news on our SPCA Cupcake Day on the 5th October. School kids will be asked to either individually or as a team, make cupcakes and sign our pledge form, pledging the money they raise from the sale of their cupcakes to the SPCA.  The more cupcakes you make and how you decorate them will go a long way to helping you raise more money for us and if your cupcakes are judged the most beautifully decorated cupcakes, you will win an awesome prize! You will also win a great prize for selling the most cupcakes! So mark the 5th of October as Cupcake Day, start asking mum and dad to buy ingredients and get baking nearer the time. If you want to sign the pledge, it will be available at our centre at 39 Main Street on the 15th of August. Then you can go forth and bake and sell!! On Cupcake day, we will have a table at the same centre where your donations can be brought in. 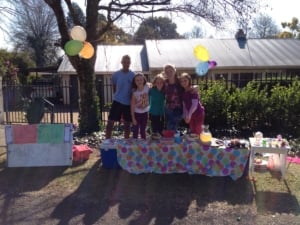 Janet, Shania, Rebecca, Kirstie and Natalie set up a stand during the holidays and sold their wares to passers by! What a good idea!